Details Of What You See When Playing The KeyMusician Keyboard

Here is a screen-shot from one of the video demonstrations of playing the KeyMusician Keyboard. 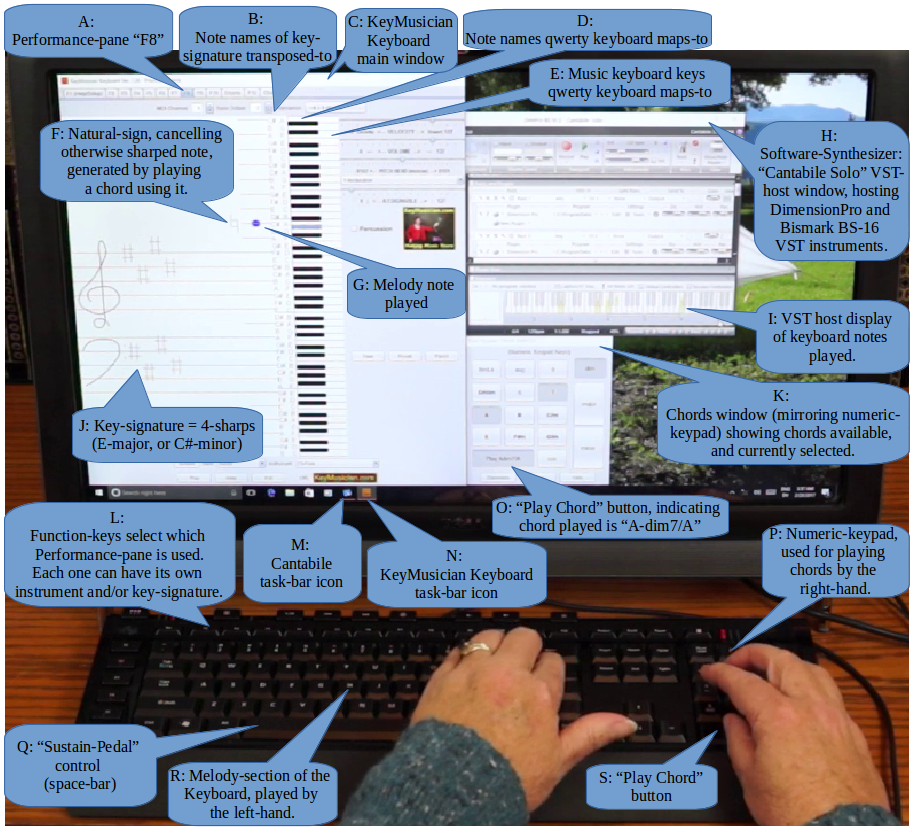 B: If transposition is being done (which is the case if there is a key-signature containing any flats or sharps), the left-most column shows the note-names corresponding to the column of note names to the right.  In this left column, a “#” means “sharp”, and a “b” means “flat”.

C: This is the main window of the KeyMusician Keyboard, which here has been re-sized to make it easier to see in the video.  This main window contains the various performance-panes, as well as the musical staff (and notes) display.

D: The right-most column of note-names are the ones that get played when you press a typing-keyboard key.  These are all white-keys, unless you first press and hold the Page-Up key (for a sharp), or the Page-Down key for a flat.  Transposing the white key notes to another key-signature automatically results in the correct notes in the new key-signature (you don’t have to manually do any sharps or flats).

E: A keyboard diagram showing the notes played by the typing keyboard.  It is drawn to scale with the musical staff to the left.

G: The note(s) played is shown using only the round part of the note (called the “Note Head”), which indicates the pitch (how high or low the note is) of the note.  This note is shown is the context of the key-signature.

H: In this demonstration, we are using the KeyMusician Keyboard to play a software synthesizer, called a “VST Host”, which is in this case, the “Cantabile” application.  You can put all kinds of VST instruments in a VST Host, and in this case, we are using DimensionPro for the Flute and Piano/strings sound, and the Bismark BS-16 Soundfont player for the Cello sound.  If you simply play the synthesizer included in the KeyMusician Keyboard, no such window will be present.

I: The Cantabile VST-Host has a display of a traditional music keyboard, where notes played are highlighted in yellow.

J: The Key-Signature (which appears in both the Treble clef (the top one), and the Bass clef (the bottom one) has 4 sharps in it.  The notes ‘sharped’ by the key-signature are indicated by the position of the “#” sign, namely, F, C, G, and D.  Four sharps is either the key of E-major, or C-sharp-minor.

K: The “Num-Keypad – Chord” window shows the chords associated with the current key-signature, along with the chord-attributes (such as major, minor, suspended, diminished, augmented, etc.) that can be applied to them.  Chords (and attributes) currently selected are highlighted (darker).  You can specify a new chord while the current chord is playing.  The newly-selected values don’t take-effect until you next hit the “Play Chord’ button.

L: The function keys are used to select which performance pane is used.  This can be used to quickly change instruments, and/or key-signature.  If you leave a note playing (held-down) and switch performance panes, that prior note keeps playing until you let-up its key.

M: The task-bar icon for the Cantabile VST-host.

N: The task-bar icon for the KeyMusician Keyboard.

O: The “Play Chord” button shows the name of the chord currently being played, which in this case, is an “A diminished 7th / A” chord.  It is highlighted while the chord is playing.

R: The main part of the keyboard is used for playing melody notes on the current performance-pane.  You can play more than one note at a time – especially if you have a gamers-keyboard with the anti-ghosting feature on all of the keys.  10-key roll-over (10-kro) will give you the capability of playing a separate, simultaneous note for each finger.  Adding an additional keyboard (one for each hand) is almost as good, but takes up more space.

S: The “0” key on the numeric keypad, is the “Play Chord” button.  You can play the current chord multiple times simply by repeatedly pressing this key.  It is normally played using the thumb of the right hand.

(Use your browser’s “Back” button to return to where you were when you came here, or click the link below to go to the KeyMusician Keyboard web-site.)